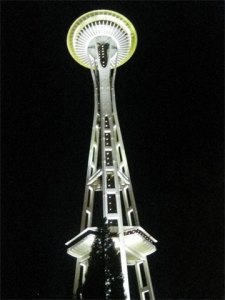 I managed to find employment. Okay, so it’s only for a couple of weeks. I did manage to get a few days in Seattle out of it for training, and on top of that of course is that any job is good because money is involved. We’re getting to that point of being stretched too thin, so money is a very very good thing that we need right now and I am thankful for every bit I can get.

Quick notes on Seattle: yes, it rains a lot. The Space Needle isn’t as impressive as I expected. I did enjoy the architecture especially near the water. There wasn’t much of a nightlife during the week, but I did manage to get fries with gravy after midnight at The Hurricane Cafe. 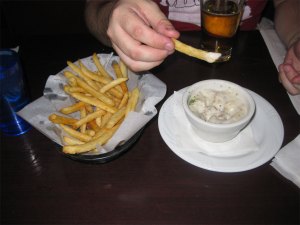 Fries and Sausage Gravy, which I read about in a review of The Hurricane Cafe but sadly they had no idea what I was talking about. They did scrape these together for me though.

My last post did discuss my eating habits and that last sentence did mention me eating fries with gravy, however, I have made some good small steps to improve my lifestyle. Since that post, I have not consumed any carbonated beverages except for some beers (mainly very tasty Coffee Stout from St. Louis’s own Schlafly). My wife and I watched Food, Inc. which is an interesting look at the dark side of how our food is made with some semi-graphic imagery of animals in the slaughtering process. Since then my wife has gone vegetarian. She even has committed to Tofurky for Thanksgiving. I just need to switch her from 2% to Skim Milk now or just buy a 3rd milk variety for the home, since we already have Whole for our son.

We are trying to walk more regularly, getting in at least 3 walks of 1.5-3.5 miles in each week. I need more activity if I want to see some weight loss out of this. In the two and a half weeks since my last post, I have lost a measly 3 pounds. With my wife’s new diet and the purging of most unhealthy foods from our home, I should see more progress on this front.

My birthday is tomorrow, on Thanksgiving, so after I devour my cajun injected turkey stuffed with cake, this plan will be back on track. I was kidding about some of that.

I’m not proud of these things, but since I have been home with my son due to my unemployment, I’ve noticed changes. Today, while walking with my wife and son around the park, the conversation was different. We don’t have cable or satellite, so while I play with Dylan, I get a steady diet of talk shows, court shows, and other daytime TV. We talked about a recent Tyra episode, and she tried to get me to catch up on Days of Our Lives for her, but I won’t do Soaps.

I brought up how I was affected by today’s Dr. Oz. There was a 53 year old cowboy by the name of Rocco who was “a meat and potatoes kind of guy.” I consider myself to be the same. I don’t eat many vegetables at all. I have a gag reflex that kicks in if I get a hint of a vegetable near me or my plate. It’s been that way as long as I can remember. My parents used to pay me to try a vegetable (or most fruits for that matter) a couple of times a year, and even that didn’t always work. There are some exceptions. I eat starchy vegetables like potatoes, corn, and peas (a strange choice of green, I know). Rocco did seem to consume more saturated fats than me though, taking in two and a half pounds a week!

Dr. Oz convinced Rocco, with scare tactics showing the effects on his body (he had the heart of an 85 year old man because of the plaque buildup), to take a 28 day challenge of a vegan diet. So Rocco does it with dramatic changes to his blood sugar, waist line, and cholesterol. He must’ve been okay with veggies at least a little bit. The adjustment for me would be very difficult considering how I react to anything green. I can sneak by other veggies not listed above by eating salsa or some soups. For some reason, I really dig lentil soup. Progresso’s version has a full serving of vegetables in each serving, so it makes me feel like I’m doing something when I eat that with some brown rice.

Rocco developed Type 2 Diabetes from his eating habits, which older, overweight people tend to get, but can be controlled and even gotten rid of by improving diet and exercise choices. I myself was diagnosed with Type 1 Diabetes when I was 12. The difference being I didn’t cause it, bad genetics did, or at least that’s one of the popular theories. I can, however, help myself out by controlling my habits better than I do though. I also was diagnosed with a fatty liver about a year ago. The main way to get rid of that is stop eating so shitty and lose some weight. Here I am still gradually gaining weight since my high school years. Why just yesterday, I ate 16 hot wings at 11 pm. It’s also worth mentioning I have slightly elevated blood pressure enough that I am on medication for that which should also have a positive effect on the liver.

Not the aforementioned night of 16 wings, but bad enough.

So do I go vegan for 28 days? I’m not sure I could. I have tried Boca burgers, and I think I could stand them. I don’t know. Today, I decided no more soda for a while at least. It’s one thing I don’t have to avoid in the house right now. I was only drinking diet sodas, but the carbonation can have some ill effects towards the kidneys and gastrointestinal system. I don’t feel comfortable saying I will keep something out of my diet that is still staring me in the face at my house. I could throw stuff out, but we don’t have much money for more food as it is. Over the next several weeks, I’d like to get something going though.

My wife will surely be supportive if I get this going and actually make progress, but she knows better than any that I have tried things in the past only to stop after two or three weeks. This is an eating disorder that is affecting my Diabetes and I’m sure is dulling my nerves and wreaking other havoc on my body. Hell, I had a scare last winter with not having feeling in my big toe for weeks due to the dulling of the nerves from too many high blood sugars. Yes, it’s silly that a daytime talk show got to me, but there was enough underlying. It’s time. I have a child now that should be motivation enough to improve my lifestyle, so that I can be there for him and see his future. Hopefully putting this out there holds me to this now. There is nothing set in stone as far as goal or how, but I will figure that out in the coming days.